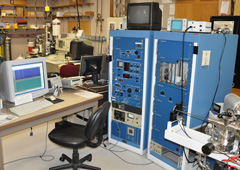 Time-of-Flight Secondary Ion Mass Spectroscopy (ToF SIMS) uses a pulsed ion beam (Cs or microfocused Ga) to remove molecules from the very outermost surface of the sample. It is done with sufficiently low intensity to insure that the molecule chains are not broken into their constituent pieces. The particles removed from the surface (secondary ions) are accelerated into a "flight tube" and their mass is determined by measuring the exact time at which they reach the detector. The exact masses can be calculated with such accuracy that particles with the same nominal mass (e.g. Si and C2H4) are easily distinguished from one another. Mass resolution to 0.00x amu and mass range 0-10,000 amu (e.g. polymers and organic components) can be obtained. The ToF SIMS can detect trace elements and image the chemical distribution on surfaces with resolutions near 0.5 microns.

The ToF SIMS system is equipped with a powerful computer and software for system control and analysis. One of the strong features of the ToF SIMS software is the ability to perform "retrospective" analysis, that is, every molecule from the sample detected by the system can be stored by the computer as a function of the mass and its point of origin. This allows the user to obtain chemical maps or spectra of specific regions not previously defined after the original data has been collected.

The advantages ToF SIMS analysis are: