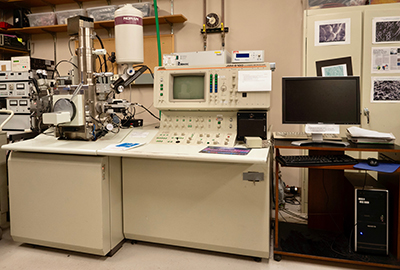 The Scanning Electron Microscope (SEM) consists of an energetically well-defined, highly focused beam of electrons scanned across a sample. The microscope uses a LaB6 source and is pumped usingturbo and ion pumps to maintain the highest possible vacuum.

Secondary Electron Imaging (SEI) works on the principle that this electron beam generates a "splash" of electrons with kinetic energies much lower than the primary incident electrons, called secondary electrons. Because of their low energies and low penetration depth, the detection of secondary electrons as a function of primary beam position makes it possible to attain high magnifications (as much as x100,000 in some cases) and high resolutions (up to ~40A resolution) for imaging the areas of interest.

Backscattered Electron Imaging (BEI) detects high energy electrons which backscatter quasi-elastically off the sample. This imaging detector operates in two modes: topographical, which yields a topographic image of the sample surface; and compositional, which distinguishes between areas of relative low and high average atomic weights. This technique is extremely useful for locating areas with concentrations of heavy elements not necessarily visible to the naked eye or to the secondary electron detector.

The Cathodo-Luminescence (CL) detector detects luminescence in the visible light range produced by the sample from excitation produced by the electron beam. The luminescence is highly dependent on trace element abundances in solid substrates, which makes this technique invaluable to the geological and semi-conductor communities. CL is complementary to backscattered electron imaging, which discriminates between different phases as a function of the mean atomic number (density); CL has the added capacity of distinguishing between different generations or domains of the same material (equal density) based on small variations in trace element content.

The Energy-Dispersive x-ray Spectrometer (EDS) detects x-rays from the sample excited by the highly focused, high-energy primary electron beam penetrating into the sample. When the high-energy electrons interact with the atoms of material in this "interaction volume," typically several microns in diameter, they generate characteristic x-rays which are fingerprints of the individual atoms encountered. These x-rays can penetrate through the material, allowing them to escape and be detected by the x-ray detector. Because the intensity of the individual x-ray is related to the quantity of the "parent atom" in the interaction volume, quantitative elemental analysis can be obtained from the sample with the aid of the powerful computer and software analysis capabilities. "Standardless" quantitative analyses give an accuracy of 1-2%, while ultimate accuracy can be obtained by spectral comparison to known standards. Detection sensitivities are about 0.1 weight percent. The software also enables one to collect elemental maps of the sample as well as linescans, digitized secondary and backscattered electron images and perform other more sophisticated analyses.

The RÖNTEC XFlash® 1000 allows fast x-ray mapping due to its high through put up to 1,000,000 cps. High resolution, high signal maps can be collected in 2-3 minutes. Overlay of x-ray images allows for color phase mapping of samples.

The cryo-preparation chamber and stage allow samples to be quickly frozen in liquid nitrogen slush, and maintained at –200C to 100C during preparation, coating, and analysis and imaging. This eliminates the need for chemical or other fixation for biological or hydrated samples.

In summary, the SEM system with the various detectors can provide the following: