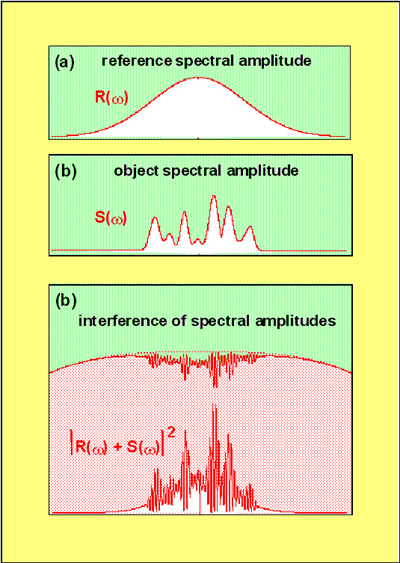 Spectral hole burning has very special properties, which are not present in conventional light-sensitive materials.   First of all, in SHB materials interference can take place in frequency domain. Figure 9 shows the frequency domain amplitude of an object pulse (b) and a reference pulse (a).  When these two are combined in a  frequency-selective media, then the resulting  intensity will contain a frequency domain interference pattern like that shown in the Figure 9c.

Such frequency domain gratings can diffract light in a similar way as the gratings in conventional spatial holograms. The special property is, however, that the diffracted beam reproduces not only the spatial image, but also the frequency domain amplitude of the object. By virtue of Fourier transformation, this allows to record and play back optical signals in time-domain. The SHB material records the frequency domain interference pattern between the reference and the object pulse. Shaded area in Figure 9c  shows the inhomogeneously broadened absorption spectrum of a typical organic spectral hole burning material that has been altered by such writing exposure. The imprinted structure is proportional to the interference pattern in the lower part of Figure 9c.

Figure 10 shows  how to write a time-and-space-domain hologram. A plane wave reference pulse is incident on a frequency-selective recording material together with an object pulse. The two signals are applied with a certain time delay between them.  The structure in frequency domain contains information about the temporal shape of the object pulse and about the relative delay between the object and the reference. The frequency domain interference pattern can be different for different spatial locations of the recording media. The spatial structure contains information about the spatial structure of the object pulse. 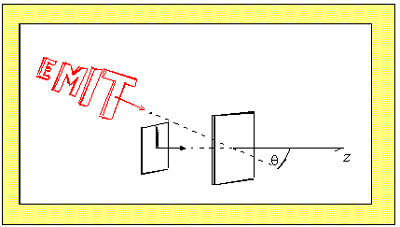 The read-out procedure is similar to conventional holograms. The object beam is terminated and the  hologram is illuminated with a replica of the reference beam. If the recording media is a thin plate, then two complementary diffraction orders (diffraction directions) appear. The distribution of the hologram signal between the diffraction orders  depends on the temporal ordering of the object and the reference pulse during the writing process.

Figure 11  shows that there are three basic possibilities to read out a time-and-space-domain hologram, depending on the relative delay between the writing beams.

(a) - If, in the writing process, the reference precedes the object, then the hologram will diffract light only in the +1 direction. The signal is a replica of the temporal and the spatial structure of the original object wave pulse. 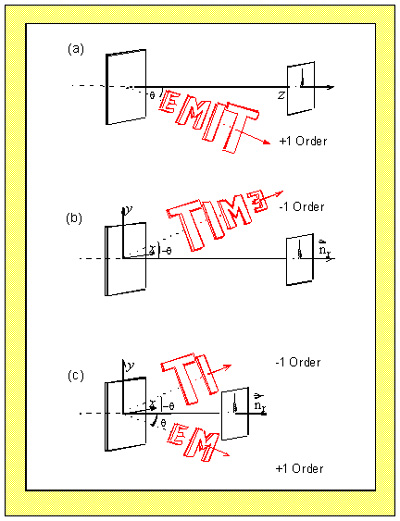 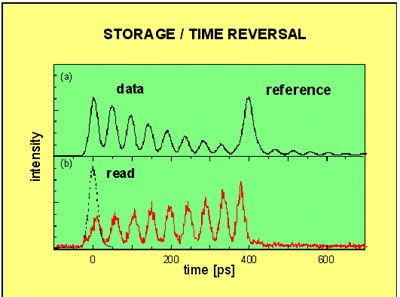 Figure 13. Demonstration of time reversal of a picosecond pulse train. 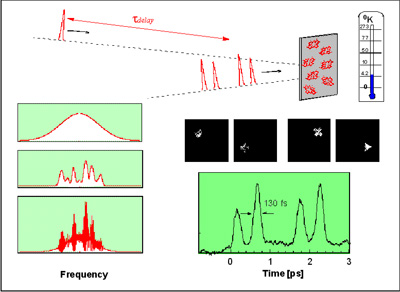 (b) - If the writing reference pulse comes after the object, then the hologram diffracts light in the -1 direction and the signal reproduces a time-inverted replica of the original object wave. The spatial wave front is also conjugated.

(c) - If the writing reference pulse is timed to overlap with the middle of the object pulse, then the hologram diffracts light in both directions. The signal in +1 order reproduces the part of the object after the reference, while the signal in -1 order reproduces time-inverted replica of the object before the reference.  These unusual asymmetric diffraction properties are a consequence of the principle of causality, which prohibits any response signal at a time that is earlier than the cause.

SHB with very broad inhomogeneous absorption bands, such as some dye-doped polymers can be used to record holograms by illumination with ultrashort laser pulses. Full resolution image holograms (Figure 12) can be recorded even if the light pulses have  a really negligible coherence time of a few femtoseconds (1 femtosecond = 10-15 s). The recording of holographic images is in this case possible only because the interference is achieved not through the coherence of the pulses, but rather through the intrinsic coherence provided by the special recording media. The effective coherence time of a frequency-selective material is given by the inverse value of the homogeneous line width of the zero phonon line. The corresponding numerical value ranges from a fraction of a nanosecond to milliseconds. Intrinsic coherence time is independent of the duration of the illuminating beams. Direct time-resolved measurements, such as  presented in Figures 12 show that SHB hologram reproduces not only the spatial image, but also the full time domain structure of the object.

Figure 13  shows how the temporal ordering of the object and reference pulses can change the direction of time.
(a)  - During the writing procedure the reference is applied after the object;

(b)  - Readout with a short reference pulse (dashed line) recalls a time-inverted replica of the object.

We have also shown the reproduction of a very high-speed optical data pulse train. The data rate here is on the order of 1012-1013 bits per second. Each pulse in this data train has duration of about 300 femtoseconds. The shortest duration of one data pulse is limited by the inverse value of the inhomogeneous line width of the recording material. Some organic dye-doped materials can provide time resolution of hundreds to few tens of femtoseconds. This experiment shows the reproduction of a 70-femtosecond data pulse by a single spot of a time-and-space-domain hologram. Thousands and tens of thousands of data pulses this short can be recorded and played back from a single spatial spot in a time less than one nanosecond. It is interesting to compare this rate to the conventional PC, which currently requires 1 to 5 nanoseconds to complete one cycle. In principle, this new technology can handle data rates of several terahertz per one single optical channel. Spatial channel multiplexing can further tremendously increase the data throughput. Future advanced technology will surely try to profit from these unique possibilities offered by SHB materials.