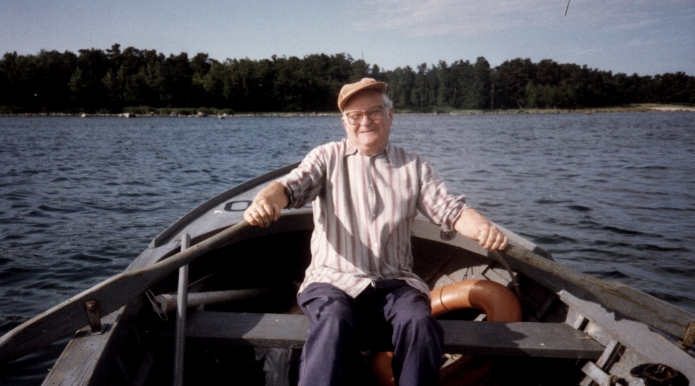 One year ago, on November 4th 2007, my father Karl Rebane passed away in his birth town Pärnu, Estonia.

My father's youth began with what might have been a quintessential tranquil small town life in pre- WW II Estonia. Karl Hendrik and his two brothers, Jaan and Toomas, were best friends and perpetual companions. The three boys shared all what teenage boys would do - playing sports, fishing trips, chess, reading and most likely dreaming of the right future ahead. My father's youthful ambition was, in fact, to play basketball and eventually become a gym teacher at the Pärnu Linna Poeglaste Gümnaasium (Pärnu City High School for Boys) - the school he went to but never graduated.

This all came to an abrupt end in summer 1941. Estonia, after having been forcefully incorporated into Soviet Russia the year before, was dragged into the war. Earlier that summer (nobody could imagine how fast German offensive was advancing), Karl and his elder brother Jaan were earning some extra pocket money by loading timber at local railway. Karl, then age 15, managed to get an inflamed blister on his palm, which required minor surgical attention at a local doctor's office. According to younger bother Toomas, because rumors of approaching war fighting were already circling Pärnu, Karl ended up showing off his "wounded" hand to his appreciative friends. Little did he know of what was awaiting ahead.

Real fighting reached southern outskirts of Pärnu in July 1941. Rebane family (along with many other families in town) chose to evacuate to what was perceived as relative safety of hinterland Russia. The Rebane family thought they were lucky to be assigned to a village called Samara in the Ural region of Magnitogorsk. The thought was that even during most hard times there should be enough food in the countryside. Unfortunately, this calculation could not been more wrong. By 1941 the Soviet regime had managed to completely devastate one prosperous Russian villages. Nevertheless, there was an Estonian school organized for the displaced Estonian families in the regional town of Verhne-Uralsk. But the two elder brothers did not get to go to that school much, if at all (as younger brother Toomas did). Firstly, the school was 10 miles away from the road-less village, where the family was crammed in a temporary mud hut. Secondly, the elder sons had to work the local collective farm (kolkhoz imeni Kalinina) to bring home at least some foodstuff, because the family was essentially starving.

These and many other details I learn from my father's diaries that he diligently kept during the war. The diaries are written in minuscule but strikingly beautiful handwriting in tiny self-made notebooks (paper was hard to come by). The elder brother Jaan was soon conscripted to fight for the Red Army. My grandfather Karl Rebane Senior was suffering from ulcers and unable to do much physical work. My grandmother Aleksandra was not fit for field labor either because she was caring for the youngest son Jüri born enroute to the Urals in summer 1941. This left Karl alone to take care of the family, who were barely surviving. In the spring- and summer seasons he worked kolkhoz fields, cut grass with a scythe and made hay with some horse-dragged rakes. In winter he was toiling in the local grain storage. Pay for the kolkhoz work was less than minimal and the family had nearly nothing to eat. The survival depended, in part, on my father and grandfather fishing the local Ural river (village dwellers would exchange foodstuff for some of their fresh catch).

In early spring 1944 Karl was called into ,military service. He joined Eesti Laskurkorpus - an Estonian division of the Red Army. He was soon sent to the front lines as crew commander of a small 45mm anti-tank cannon. After heavy battles on river Narva, the Red Army advanced westward, and my father ended up in what turned out to be one of the bloodiest battles on Estonian soil during WW II on the island of Saaremaa off in the Baltic see coast. The heaviest fighting ensued In October-November 1944 on the narrow peninsula of Sõrve, when Red Army units were pushing against the receding German troops, while the last were trying to make their way westwards over the straits of Riga. German defenses included cruiser Prinz Eugen, whose heavy cannons were firing constantly from the sea at the Red Army positions near the village of Torgu, in what is essentially a table-flat landscape. One day before the battle ended, on November 23, 1944, my dad was wounded. A splinter from one of those exploding heavy artillery shells took off one of his toes.

My dad seldom talked about how he survived, but what I remember him saying is that he dragged himself for a mile or more over the muddy fields. But before he reached relative safety, another splinter hit his lower leg. Luckily, it was the same leg. So, he was able to continue crawling along. After a while he was able to call out for help and was eventually picked up by the medics, who were hiding from the deadly shelling from Prinz Eugen.

Only a few men of his whole unit made it to the end of that day alive. This was a meat grinder. A classic example as far as sending soldiers to sure deaths goes. My father had unbelievable luck by getting out alive. But surviving the Torgu was not the end of his ordeal. In the hospital, due to dirt caught up in his wounds, he developed tetanus, where the outcome is usually lethal. I can only guess, but most likely it was his iron will to live that got him through that, too. And he even managed not to loose his leg. However, the youth dreams of playing basketball were over.

I am sharing these stories with you in a hope of perhaps shedding some light on what made my father the person he was. He was certainly not born to be a strong leader. Nor did he aspire early on to become a world renown scientist. I have come to realize that the real reason behind his distinctly soft, compassionate sense of humor were his life's harsh lessons. If, more than once, you are about to loose your young life, then you may start seeing things differently. One becomes absolutely sure of himself. One also develops a sense of compassion that draws neither on self-pity nor vanity. And exactly this kind of person can be true leader of men.

His humor and insight are still missed dearly by family and friends.

My father left behind a long list of published scientific papers. But he also accumulated a body of manuscripts and other unpublished materials that my sister Inna and I are donating to the Tartu University Library.